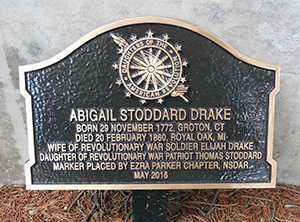 Abigail Stoddard Drake lies next to her husband, Elijah Drake, an American Revolutionary War Soldier, in the family plot in historic Royal Oak Cemetery. Born in 1772 in Groton, Connecticut to American Revolutionary War Patriot, Thomas Stoddard and his wife, Abigail Culver. Abigail met and married Elijah Drake in New York in 1790 where he had settled after the American Revolutionary War serving in the Pennsylvania militia. The couple moved to Michigan in 1835 with five of their 10 children, eventually settling in Royal Oak where they resided until their deaths; Elijah at age 88 in 1848 and Abigail in 1860 at age 87. Their sons were instrumental in the settling of Michigan. Morgan, a lawyer, became the registrar of deeds in Oakland County in 1835; Thomas, also a lawyer, served as a state senator and later as the justice of the Utah Territory Supreme Court appointed by President Lincoln. Flemon, a physician, served as justice of the peace and postmaster in Royal Oak. The family was truly Michigan pioneers who helped to settle the territory and to make it a state. On May 19, 2016, the Ezra Parker Chapter, NSDAR, dedicated a bronze marker in her honor at her grave in the Royal Oak Cemetery.
Scroll to top