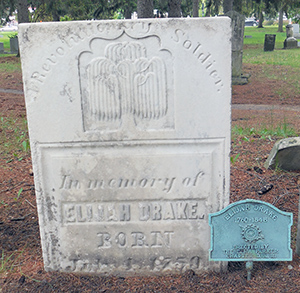 Elijah Drake spent his early life in the neighborhood of the Delaware Water Gap, on the border of New Jersey and Pennsylvania. He was born July 4, 1759, in Smithfield, Pennsylvania. In the sparsely settled country embraced by Smithfield Township, the settlers were protected from raids of hostile Indians by the garrison at Fort Penn. In June 1778, Elijah enlisted as a private and served six months under Captain Schoonhoven, Colonel Stroud’s Pennsylvania Regiment. He reenlisted on June 5, 1779, for three months under the same captain in Colonel Armstrong’s Regiment Pennsylvania troops. He married Abigail Stoddard in 1790 in Newton Point (now Elmira), New York. He and Abigail raised ten children. Elijah and Abigail came to Royal Oak with their son, Dr. Flemon Drake in 1844, where they made their home the remaining years of their lives. Elijah Drake died on April 8, 1848, in Royal Oak, Michigan. Elijah Drake is buried in the Royal Oak Cemetery, and the chapter dedicated the marker on his grave on July 15, 1928.
Scroll to top