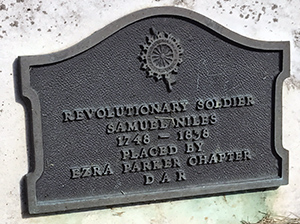 Samuel Niles was born on October 4, 1748, in Cornith, Rhode Island, and died July 9, 1838, at the age of 90 in Troy, Michigan. He married Smellage Sisson and they had three children. Smellage died in 1835. His second wife was Lacy Roberts. Samuel Niles was a private in Captain Dyer’s Company; he was on the company roll of Colonel Lypett’s Regiment – September 1776. Niles was also in Colwell’s Spirit of 1776 Regiment of Rhode Island. The Ezra Parker Chapter, NSDAR, marked his gravesite at Crooks Road Cemetery in Troy, Michigan, with the DAR marker in 1975.

His son, Johnson Niles, was born May 2, 1794, in Richfield, New York. He married Rhoda Phelps and resided in Steuben County, New York, after his marriage. He moved around 1821 to Detroit, then to Troy Corners, Michigan. He was the founder of the settlement of Troy, Michigan, along with being a farmer, postmaster, merchant, justice of the peace, member of the state legislature, and state senator 1844-1845.