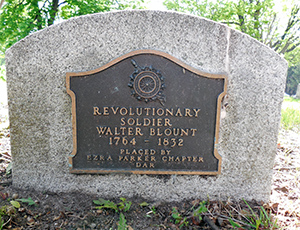 Walter Blount was born May 21, 1764, in Norwich, Connecticut, and died September 15, 1832, at the age of 68 in Troy, Michigan. He married Deborah Herrick of Preston, Connecticut, on September 1, 1785. Herrick died after 1820. Walter Blount served with Captain Campbell’s Regiment during the American Revolutionary War. The Ezra Parker Chapter, NSDAR, marked his gravesite at Union Corners Cemetery with the DAR marker in 1951.