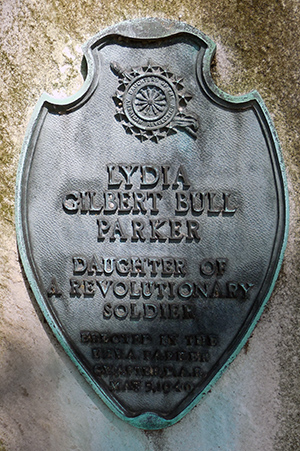 Lydia Gilbert Bull was born on October 12, 1783, in New Hartford, Connecticut, to American Revolutionary War Lieutenant Asher Bull and his wife, Hannah Hopkins. On March 26, 1803, Lydia married William Morse Parker, an early Michigan settler. Lydia and William had 11 children and moved to Royal Oak in 1837, where she remained for the rest of her life. Lydia died on August 26, 1866, in Royal Oak, Michigan. Lydia was also the daughter-in-law of chapter namesake Sergeant Ezra Parker, and the granddaughter of Aaron Bull, an American Revolutionary War Patriot, and Consider Hopkins. On May 5, 1940, the Ezra Parker Chapter, NSDAR, dedicated a bronze marker in her honor at her grave in the historic Royal Oak Cemetery in Royal Oak, Michigan. On July 20, 2000, the chapter dedicated a new, larger marker on her grave which added additional information.
Scroll to top